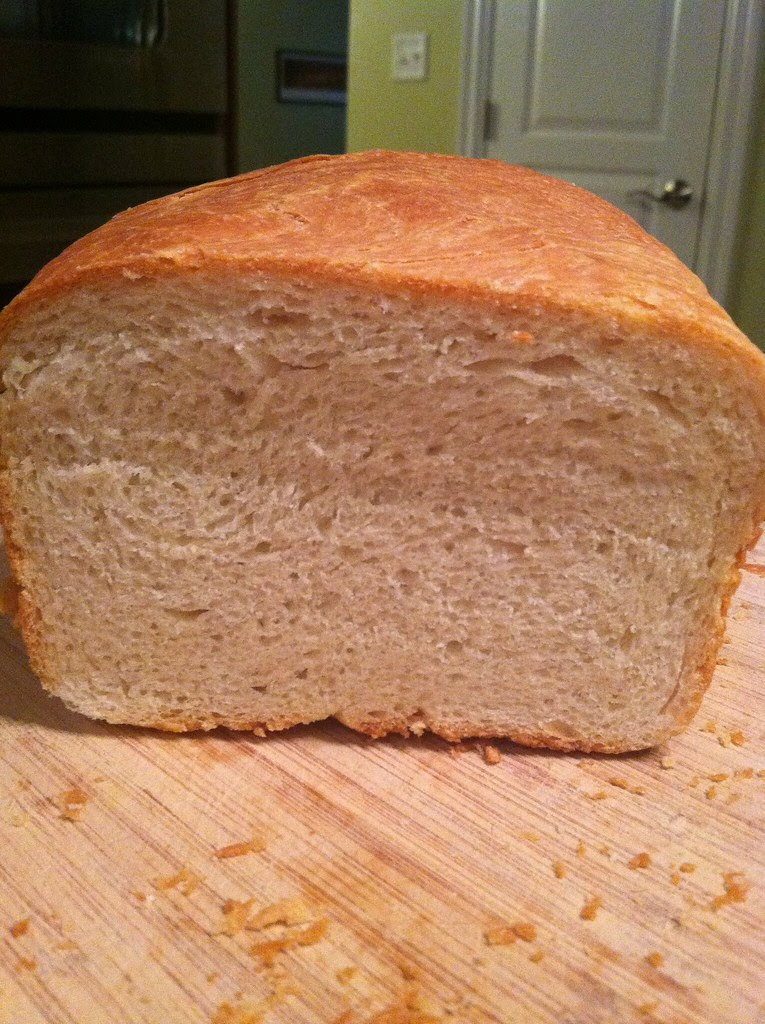 See that lovely little loaf of white bread?  I made it.  From scratch! Here's how it happened... 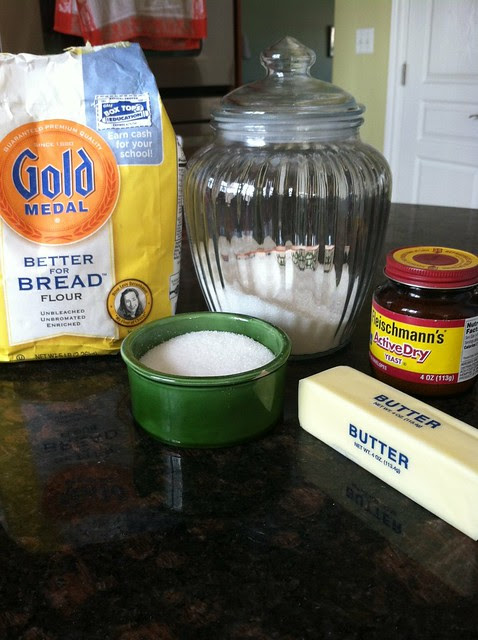 First, I gathered the ingredients. How could these simplistic kitchen basics turn into a crusty-on-the-outside, soft-on-the-inside loaf of such salty-sweet goodness, I wondered? 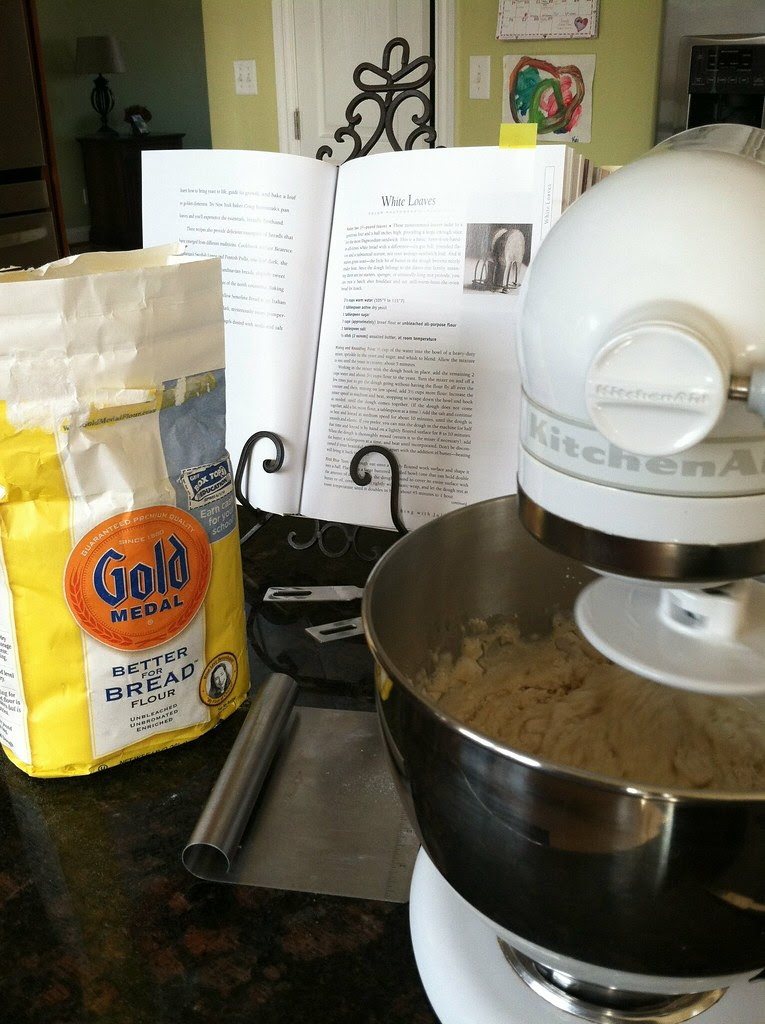 I opened Baking With Julia to the recipe for White Loaves, our first Tuesdays With Dorie group baking assignment. 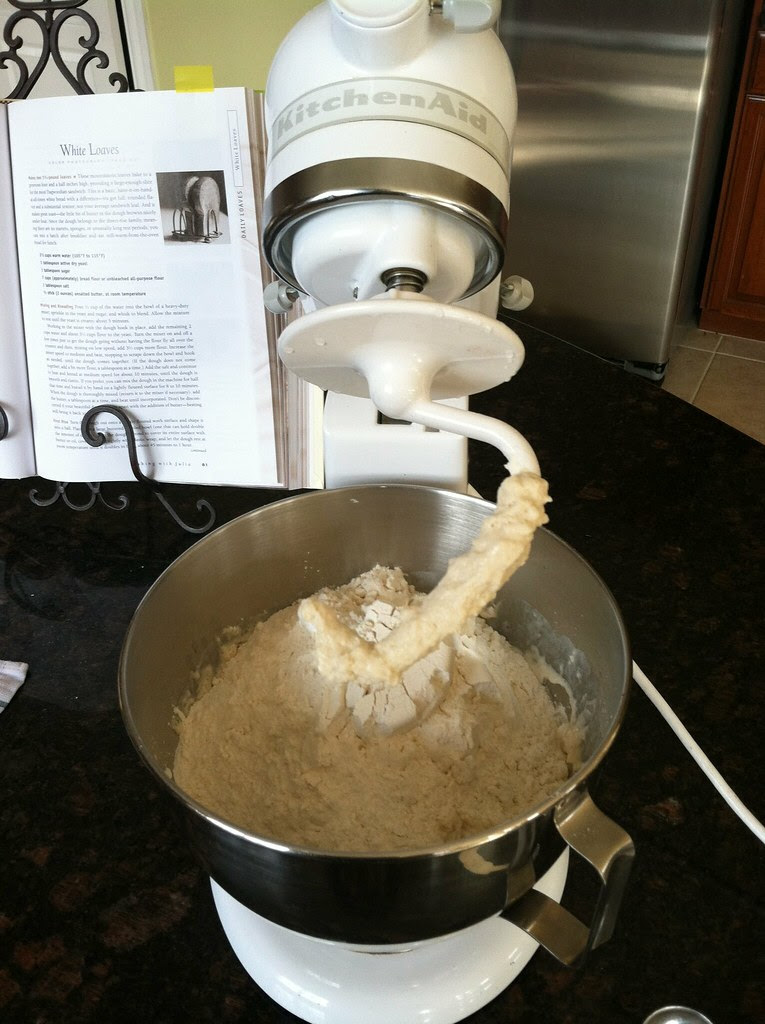 I followed the instructions laboriously, as in reading them aloud to myself over and over and over again.  I was not about to forget an ingredient or miss a crucial step.  Remember I had never even used the bread hook attachment before! 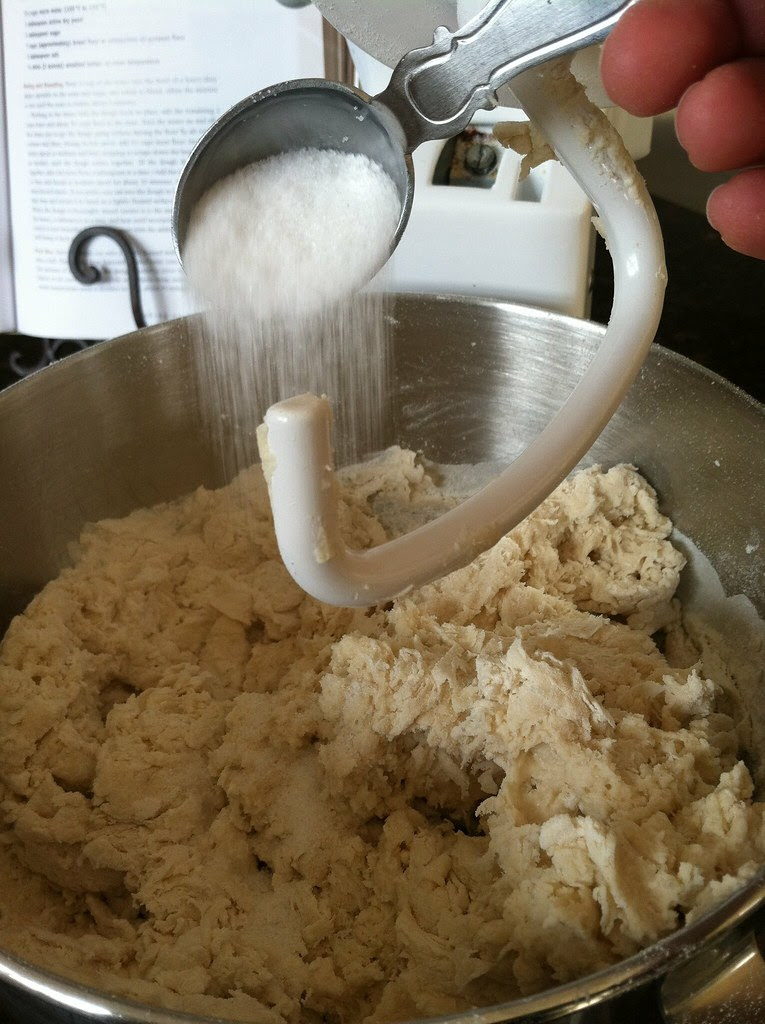 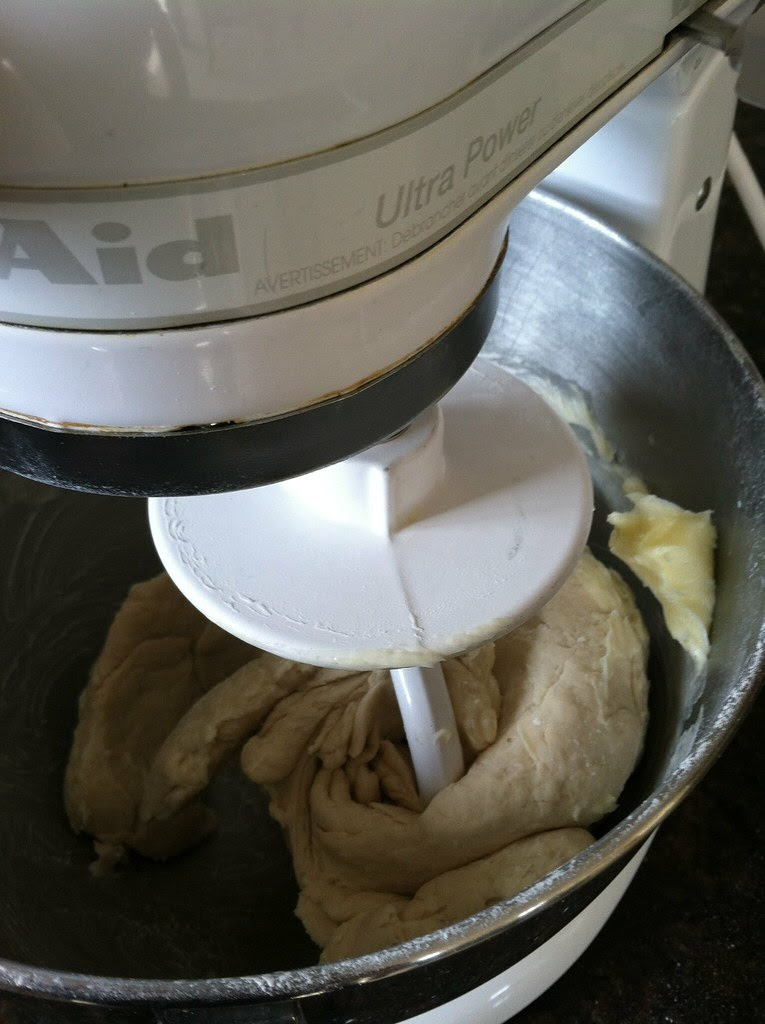 Elation turned to terror as the mixer strained and groaned trying to knead the dough  for so many minutes. I re-read the instructions again to reassure myself that all was going as written.  My poor mixer started to smell like burning oil.  It was overheating and I knew what must be done... 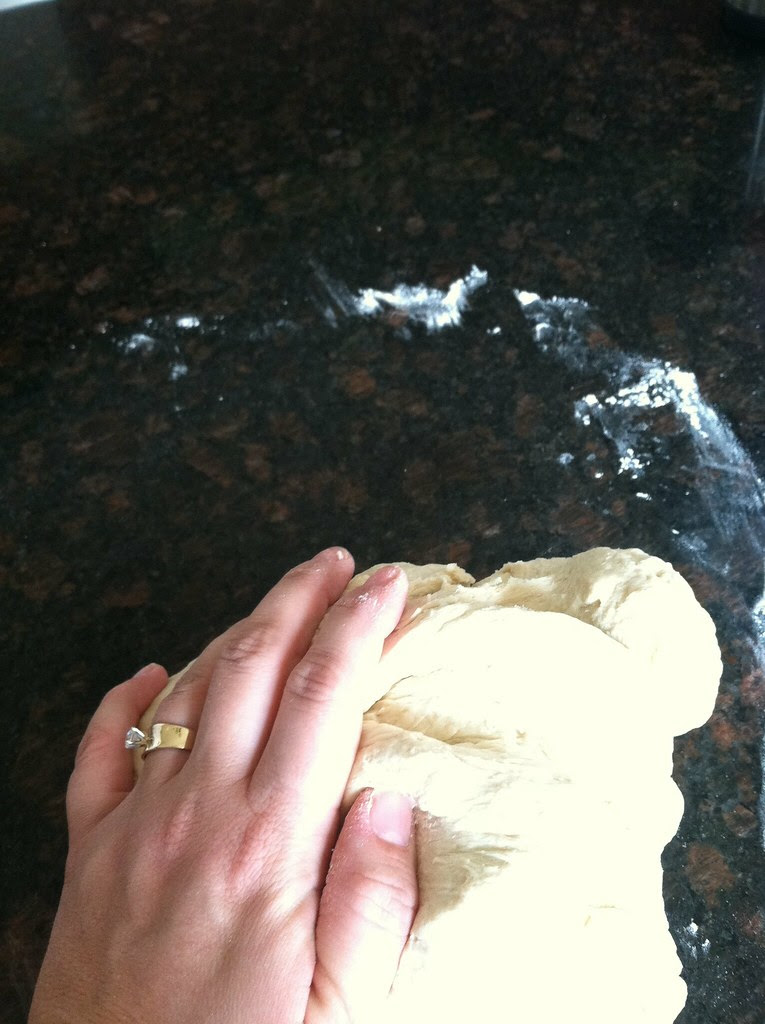 I was going to have to finish kneading it by hand.  And I did.  For eight. solid. minutes.  It wasn't at all puffy and pliable as I imagined bread dough would be.  In fact, my hands were getting sore and I couldn't imagine anything less than hard as rock being the result of my efforts. 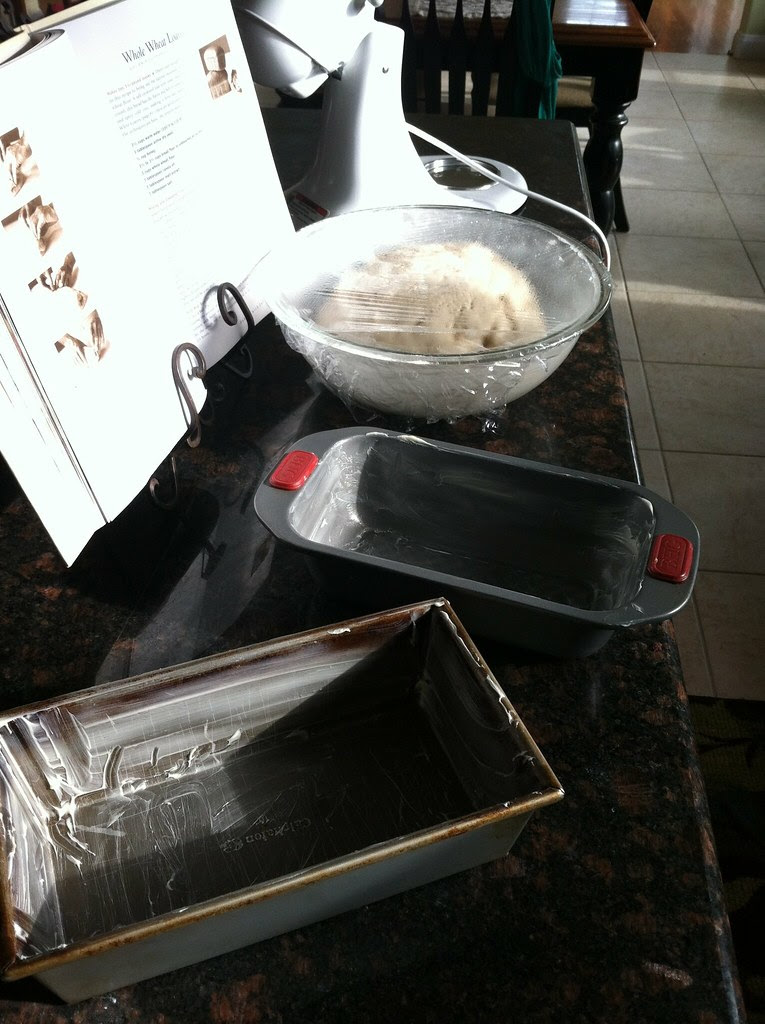 I set the dough aside to rise while I went to pick up the boys from school. To my utter shock and delight, upon my return the dough had become the soft, pliable ball of yeasty goodness I had earlier envisioned. 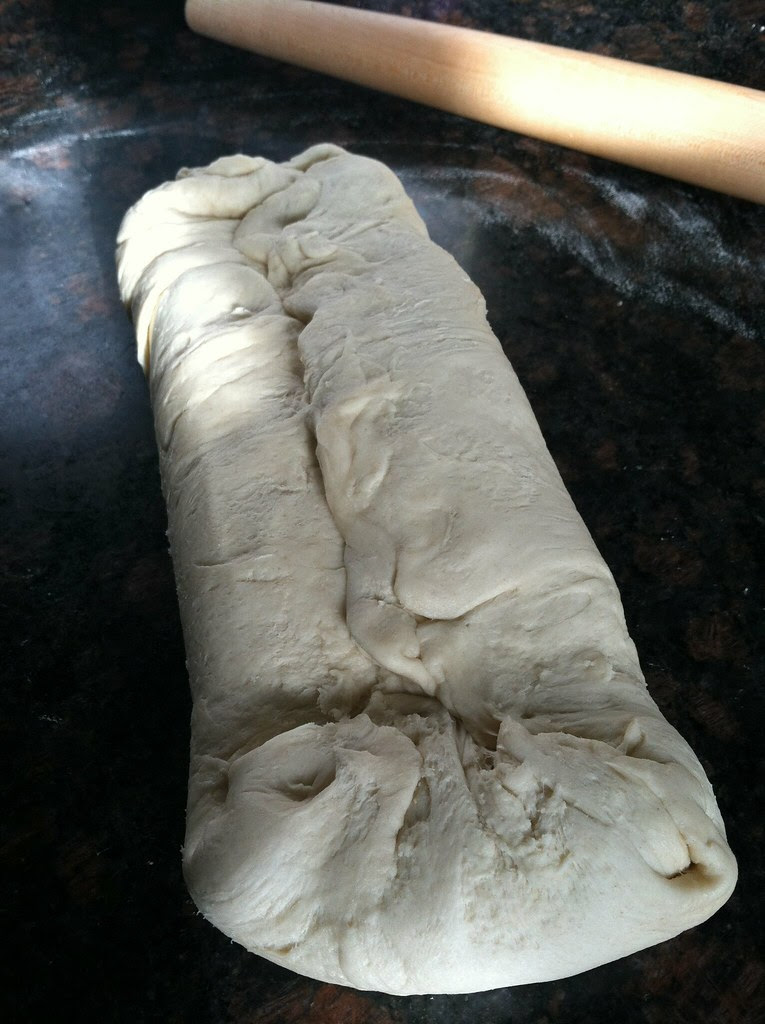 Laid it as gently as a newborn baby into the buttered pans.  In order to get it to rise to the described height I had to heat the oven a bit and set the loaves inside the gently warm oven. This was the longest part of the whole process ~ and I believe in retrospect~ the secret to my success.   I don't know how I thought to do it but I was glad I did.  I will think of it sooner next time since by the time I was ready to bake them it had been four hours from the time I had begun mixing the dough. 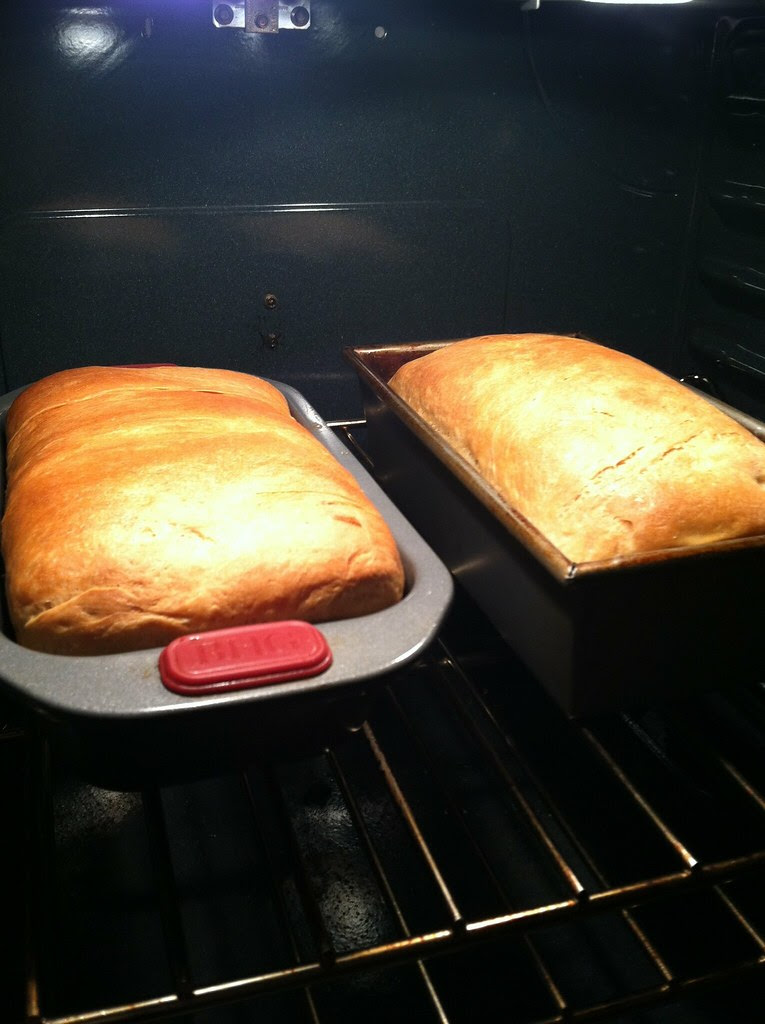 Do you realize how delectable the smell of baking bread is in your house?  Trust me, it ranks up there with the best homey smells in the universe.
At this point I was nervously optimistic. 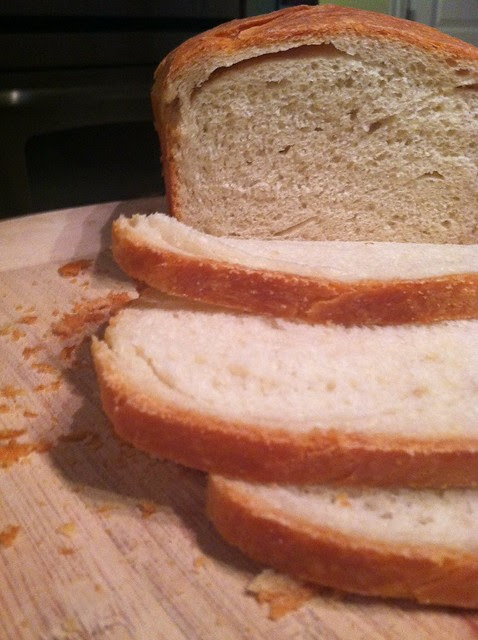 The crust on my loaves was literally so firm I could knock on it with my knuckles and not make a dent.  This is no wimpy loaf of Wonderbread people.  When I finally cut the first slice of bread a breathless gasp of surprise escaped me.  It had worked!  I had actually baked an incredibly beautiful loaf of bread. 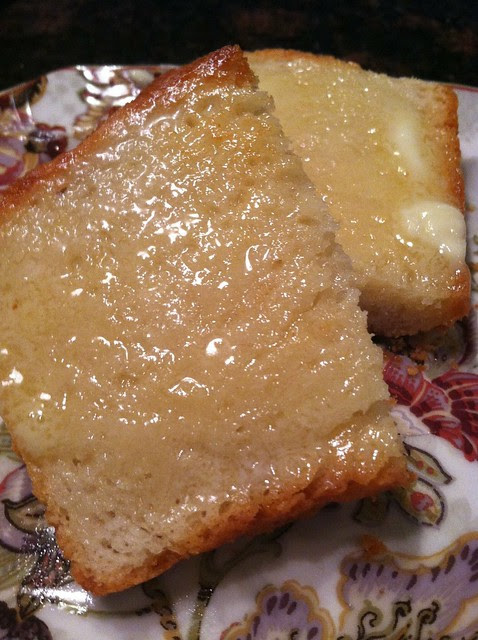 I guess I should have expected no less from Julia and Dorie and their collaborative baking guidance.
My boys gobbled up two slices each while I lightly toasted the heel and slathered salted butter all over it.  Suffice it to say that I will definitely be making more of this bread and will soon try my hand at the whole wheat recipe which comes next in the book.

To find the recipe for WHITE LOAVES please stop by our hostess' blog.
If you would like to join in the baking fun, buy a copy of Baking With Julia by Dorie Greenspan and bake along with us in two weeks when we make Chocolate Truffle Tarts.
To see how some of the 300+ other bakers' loaves turned out go here and find the links in the comments.