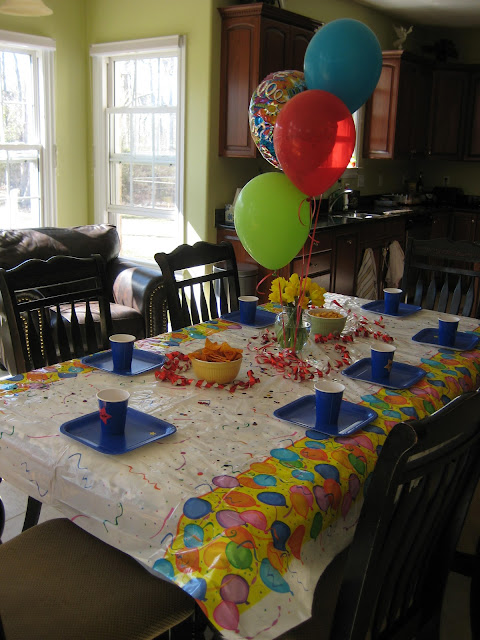 It was the first one that did it. My son was four and invited to his first-ever birthday party.  It was to be at the little girl's house one Saturday afternoon in October.  Since I had never met this family, I decided to stay for the party myself along with several other parents.  You see, the entire class was invited.  Nearly 30 four year olds had arrived at the front door of a lovely home and stepped into the "Birthday Zone".

The first stop upon arriving was to stand still and have a photograph taken.  Then it was into the double garage where long banquet tables were laid out with tablecloths while toddler-music pumped from a nearby stereo. On one side were four card tables covered with crafts supplies and adult helpers stationed to assist.  At one station, kids made spiders for Halloween, at the next, they decorated picture frames.

Then it was on to games.  The children were divided into groups and moved through several simple game stations such as bean bag toss and clothespin drop.  What made these games less than simple was that the crafty mother had sewn special bean bags for the party, painted each clothespin to look like an animal and so on.  The amount of detail was staggering.

After a stop at the tables for hot dogs and cake, the now-worn out children sat in a circle to watch the birthday girl open all her presents.  Upon departure each child was presented with his own photo inside the picture frame he had just created as well as nearly as much candy and treats as we would later collect while trick-or-treating.

And that did it.  I knew I would never, ever, host a birthday party at our house.  Not only was it chaotic but I was in no way prepared to go to such details to keep little ones entertained for three hours.  I felt insecure and overwhelmed.  For the next few years we took what I thought was the easy route, combining our boys' parties at locations like bounce houses, bowling alleys and go-karts. All we had to do was to show up.  It was great.  But it still felt like too much.  Too much stimulation, too much money, too much hustle and bustle, too much extravagance.

This year, in keeping with my word of the year, Enough, my boys agreed to go back to basics.  We had separate parties, each with only four friends invited. Goody bags contained one pack of jellybeans, four chocolates and a mini calculator from Target's dollar spot. I found a party decorating kit at WalMart with a tablecloth, balloons, shiny table sprinkles and a banner. I bought simple paper goods and the day of the party stopped at my grocery store, chose a pre-made cake and had them add my son's name. We ordered pizza and played with toys and games the boys have at home.  For most of the party the boys played in the backyard together.   It was heavenly.  My husband said, "This is the best idea you ever had." My son said, "This was the best birthday party I ever had." As for me, I loved the ease and simplicity of these parties.

Isn't it what all the adults are complaining about these days: kids who expect so much, are easily bored and so often disappointed with what they get?  Kids who are spoiled and don't even know how good they have it?  Well, it makes sense to me to begin in my own home, demonstrating that fun is simple. I love it when people go the extra mile to decorate and entertain for all types of parties but I often wonder, at what personal cost?  Were they screaming at their little ones right before the party, hurrying to decorate and perfect? It reminds me that this is Motherhood, not Marthahood, and simplicity is peace.