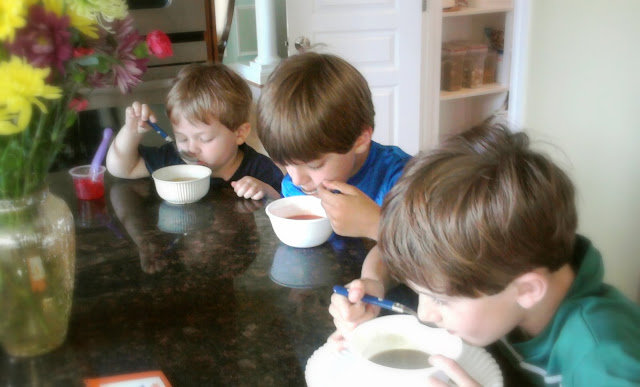 After we had children I was full of grandiose plans for big Sunday Dinners.  My grandmother had once described how she would put something in the oven before church and come home to a welcoming meal ready to be placed on the table.  Thus began my own sugar-plum visions of roast meats, mashed potatoes and homemade pies being passed hand to hand as we gathered round the lazy Sunday table, laughing, telling old family stories and thanking God for another blessed week.

We purchased an ornate set of  table and chairs for the dining room, formerly known as the playroom.  I would use my fine wedding china, my husband and our guests would sip wine from our crystal goblets.  Norman Rockwell could paint the scene.

At some point I realized that maybe those visions were really just fantasies.  I didn't want to get up extra early to sear meat so it could go into the oven, boil potatoes to be mashed later.  My family didn't want to stay in their church clothes after Mass and they were so hungry when we got home they had no appetite for a huge meal later on. We had no good friends to invite over for dinner and I didn't want to spend all afternoon cleaning up pots and pans when it was all over.   Thus was born Sunday Soup Night.

Soup was the perfect solution to my Sunday situation.  No need for a side of vegetables, they're in the soup! I realized that my children loved chilis, soups and stews more than other multi-course meals.  And soup makes lots of leftovers so the "what to send for lunches on Monday" question was solved. And best of all, I like to make soup.  It is comforting all that chopping and stirring and simmering.  It's delicious with a hunk of crusty French bread and melting butter. It tastes even better the next day.

Over at my other blog, Bake Me Away, I posted the first of my favorite soup recipes, Tomato Rice Soup.  If you're looking for a simple, tasty, one-pot meal to simplify your Sunday you just might like to try this one out. I plan to post a new one each Sunday until I run out of recipes.  If you have a favorite to share I would love to hear about it!