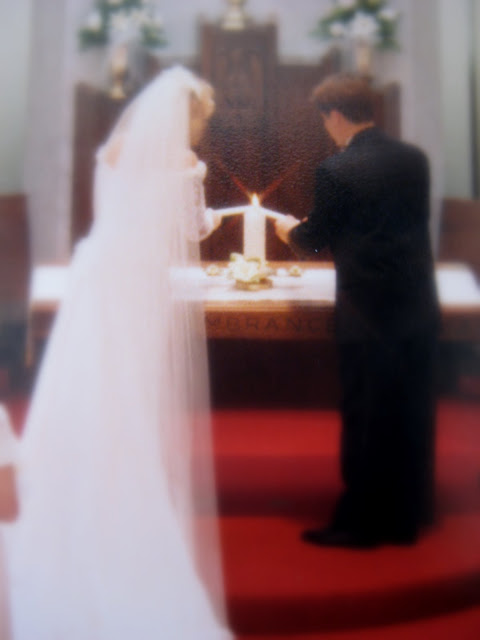 Fifteen years ago yesterday, he and I lit the unity candle before our family and friends.  We turned toward one another, away from all others, forever.  Three lights flamed into one, united in Christ.
For years I had that candle displayed on a golden candlestick in our home.  Occasionally, we lit it on our anniversary, a mini renewal of vows.  Then one year it was next to the fireplace.  Apparently each time we enjoyed the fire, the candle warped a bit more.  When I finally noticed it, the entire back of the candle had melted, dripping down the candlestick, puddling on the floor.  From the front, the outer shell of the candle still held firm, it looked beautiful.  Turned around, the back was missing entirely.  I wondered how it had even stayed standing with its structure so damaged.
Like that candle, we have melted and warped a bit throughout the past 15 years of marriage.  Three job changes, three cross-country moves and three children puts a little excess heat on a couple at times.  But while we may drip away and puddle sometimes, for a day or even months, we have always been able to turn back toward each other, relight the flame and stay standing.  Precisely because we are three in one and our base is not built by ourselves, but rests firmly on the grace of God.
The other day I heard a radio personality say he believes it is the human condition to have ups and downs in our emotions and our lives.  He thinks it is misguided, even dangerous, for people to expect to feel the same everyday.  I thought of the life of a marriage.  We expect to feel the same everyday, every year, as we did on our honeymoon and when we don't we think things must be over, must end.  But what if we chose to accept that it is normal to have ups and downs in marriage?  Could we make it through the melting moments and remember that when things are allowed to cool, they become firm again? 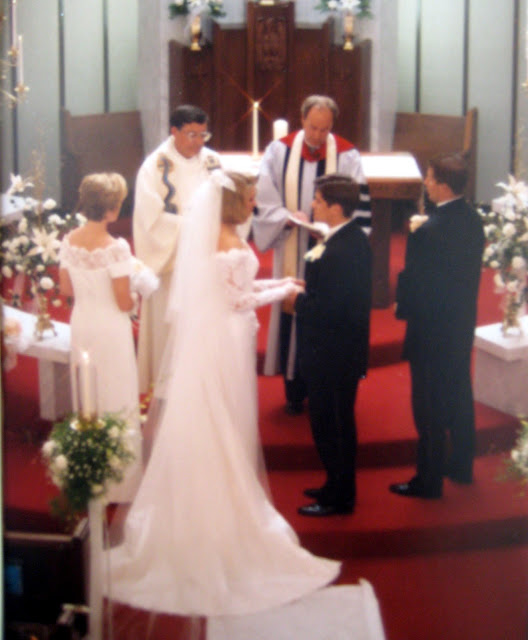 Back then, I had no idea that the unity candle is most often not allowed in Catholic wedding ceremonies.  How would I have known being a Presbyterian, marrying a Catholic, in my home church?  Though I later converted to Catholicism myself, I am grateful that we have our beautiful, ugly unity candle to represent what we used to be, what we are and what we can always aim to be.  Three.